Recently, the talent group of municipality Sittard-Geleen concluded a series of hackathons with a grand finale in the Fortuna Sittard Stadium. Five participating primary schools were allowed to work on an idea to create more connection in the municipality. The talent team facilitated this through several hackathons. Last Wednesday was the final of those – and what a final!

From outside to inside

In recent months, the talents have been working within the talent programme on the project ‘from outside to inside’. This included sessions with residents, but also with various entrepreneurs. All aimed at learning what is going on in different areas within the municipality from the perspective of residents, entrepreneurs and students.

One final component was the organisation of several hackathons for more than 200 primary school pupils from grade 7 and 8. Participating schools had to submit an idea to create more connection with society and residents in the municipality. The school with the best idea was treated to a trip to the Efteling amusement park.

During the final at the Fortuna Sittard Stadium, the ideas were presented to the jury, consisting of the Mayor Hans Verheijen, Raymond Clement and municipal secretary John Heesen. The choice was difficult with so many good and inspiring ideas, yet there was one winner; namely a Nature Festival in the centre of Geleen. “We find many parts of the other ideas very valuable and a it would be a loss if we do not include them. That is why we rewarded all participating pupils with a visit to the Efteling!”, said Mayor Hans Verheijen.

The hackathons for primary school students have come to an end. So are the other sessions with entrepreneurs and residents of the municipality. From all these meetings, a lot of information was received about what can be taken up within the Municipality of Sittard-Geleen for the benefit of society. The talents will now work on this further. “We are proud of how the talents have shaped and organised this final event alongside their daily work, chapeau for that!”, indicates Jean Peters, one of Perfact’s supervising coaches.

Now concrete plans must emerge from all the information. “From Perfact, we will continue to guide and support the talents in this,” adds Karina Peters-Jeurissen, one of Perfact’s supervising coaches. “In the past year, our role has mainly been to help the individual talents and the group as a whole grow. From now on, our role will be to shape the project within the total organisation in an advisory and consultative way and to carry it along as an ambassador,” Karina concludes. 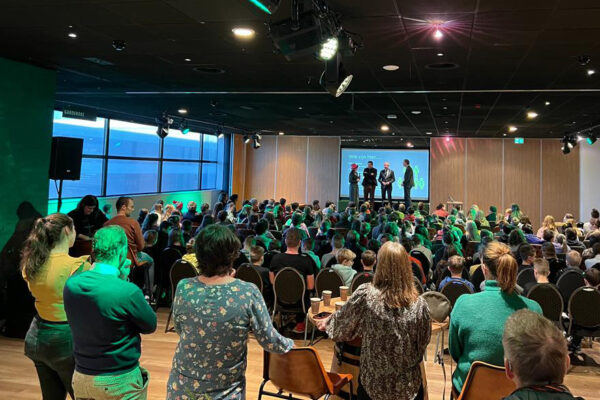 Let’s make the difference together. I’m happy to help!

From the Maastricht municipality, a group of selected talents have started the Talent Development Programme (TDP). The programme runs from 2022-2024 and is dedicated to ‘Together with pleasure for Maastricht’. The aim of this programme is to allow the talents to grow personally and to contribute to the organisational development of the Municipality of Maastricht. […]

The talents have started!

Team coaching: “We keep doing, what we do”

The strength of our Perfact Human Development coaches is that they stay close to themselves. They approach projects openly and in a no-nonsense way, without ulterior motives, without frills. Just from person to person. Everything can be discussed, it has to be, but there is also room for it. Team coaching programs are sometimes intense […]